HOW TO INCREASE AUTHORISED CAPITAL OF A COMPANY

The device of the authorized capital is used to limit or control the ability of the directors to issue or allot new shares, which may have consequences in the control of a company or otherwise alter the balance of control between shareholders. Such an issue of shares to new shareholders may also shift the profit distribution balance, for example if new shares are issued at face value and not at market value.

Why to increase Authorised Capital: Generally, the companies are registered with a small authorised capital and they increase it as per the requirements or conditions imposed by the lender/investors, customers (particularly the government companies and large corporates where the capital and net worth of the suppliers are prescribed and when the company wants to issue the bonus shares). The Companies Act 2013 allows the companies to alter its authorised share capital with certain procedures which are governed by Section 61-64 of the Act along with Section 13 and 14 of the act which governs the alterations to the Chartered Documents being the Memorandum of Association and Articles of Association of the company. 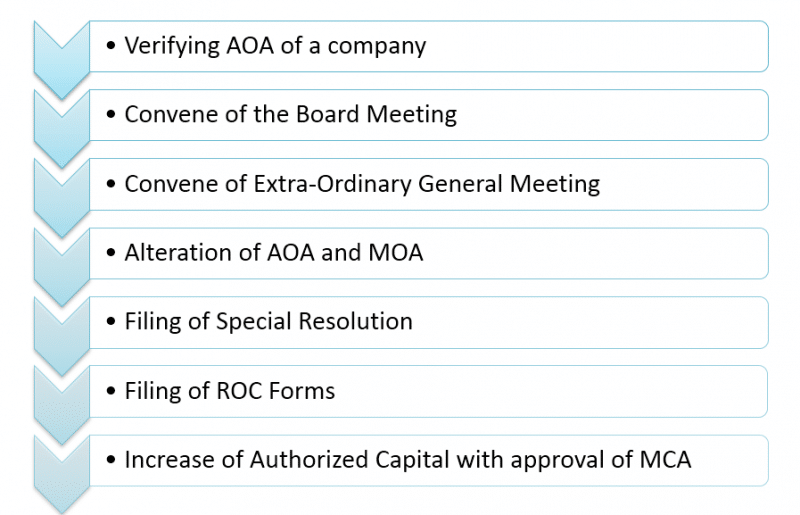 Form MGT-14 is required to be filed in case of special resolution passed for the alteration of the AoA.

Filing E-Form SH-7: In case, a company alters its share capital/number of members independently or increases the share capital by conversion of debentures/loans due to order of Central Government, then a return shall be filed with the registrar within 30 days of such alteration or increase. The return shall also be filed where the company redeems any redeemable preference shares. Stamp duty can be paid electronically through the MCA portal and the following documents are to be attached:

Filing E-Form MGT-14: A copy of resolution which has an effect of altering the articles and copy of every agreement shall be embodied in or annexed to every copy of the articles issued after passing of the resolution or making of the agreement.

The changed status of authorised capital of the Company can be checked at MCA site.

Time Limit for Filing the Forms with ROC: A company has to file with the concerned ROC certain Resolutions and agreements. These are filed after passing the resolution at the meeting. The particulars of such resolutions are to be filed along with this form. The e- form has to be filed with ROC within 30 days of passing of the resolution.